Kulturspeicher - English Version > About us

The old building with three neo-baroque tail gables was build in 1904 and formerly used as a granary. It is situated like an elongated latch parallel to the Main river at a an artifical water basin in the Würzburg harbour and once belonged to one of the most progressive depository warehouses of the bavarian state harbour. 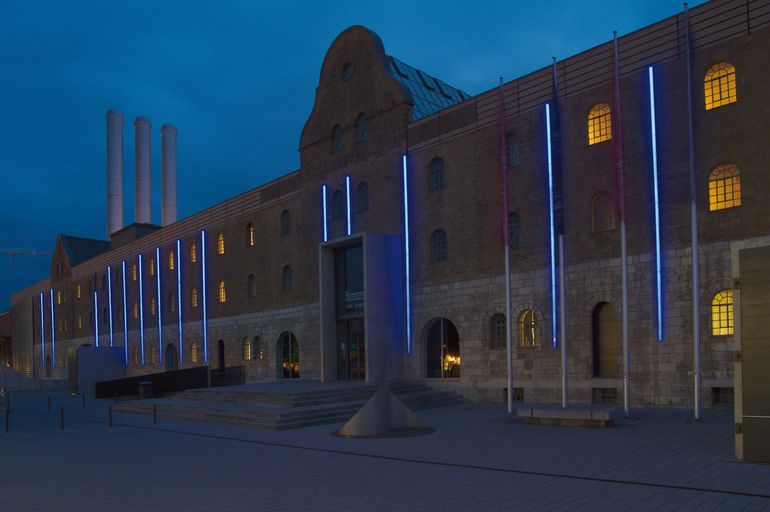 Between 1996 and 2001 the architects Brückner & Brückner rebuild the 128 metre long granary. Even after the rebuild into a museum, the storage was able to keep its characteristic functionality. In the glass – covered lobby, which is about 12 metre high the historic grid support was preserved. Together with the carefully restored face of the buidling and the historic windows and gateways, they tell of the vivid past of the building and the whole area.

On 3,500 qm of exhibition space, in 12 rooms and three levels the art is now being presented.

The museum is a facility of the City of Würzburg.

Since 7 July 2008, the museum in the Kulturspeicher has had a work of art that begins to light up on the outside exactly when the museum rooms are closed on the inside. It is the installation "Blue Line" by Waltraut Cooper. Permanently attached to the façade of the museum, it immerses the Kulturspeicher in blue light every evening.

For many years the mathematician and physicist Waltraut Cooper has been concerned with light, systems of numeration and numeric coding. On multiple occasions she has stood out in the field of public visual arts. She was a participant of the Venice Biennale twice (1986 and 1995). For more than 30 years she has exhibited her work in well-known European and American galleries, including the Museum Moderne Kunst Vienna (1982), the Stedelijk Museum Amsterdam (1987) and the Galleria Nazionale d’Arte Moderna Rome (2002). Through constructive and concrete thinking and precise analysis, her works display a poetic effect, which is why these works of light also bear the title “digital poetry”. Waltraut Cooper translates language into light. The light installation “Blue Line” consists of blue acrylic strips with LCD-lights which are programmed so that when it becomes dark, every 30 minutes light pours out like a waterfall from the top to the bottom.

Although Cooper’s light installation is on the facade of the Kulturspeicher, there is also a reference to what can be found in the building itself: the 5-digit binary code is a translation of the words “Collection Peter C. Ruppert” and “Städtische Sammlung” (Municipal Collection).
The installation was conceived for the building and is characteristic of Waltraut Cooper’s work. The vertically integrated rods on the entire facade have already become the landmark of the museum.

The installation was realized through the main sponsorship of Raiffeisenlandesbank Austria, with its branch in Würzburg, as well as the Ruppert Foundation, Bernhard Frericks, the Austrian Federal Ministry of Art, Education and Culture, the Federal Board for Culture in Upper Austria, Energie AG Upper Austria and the Austrian Cultural Forum in Berlin.